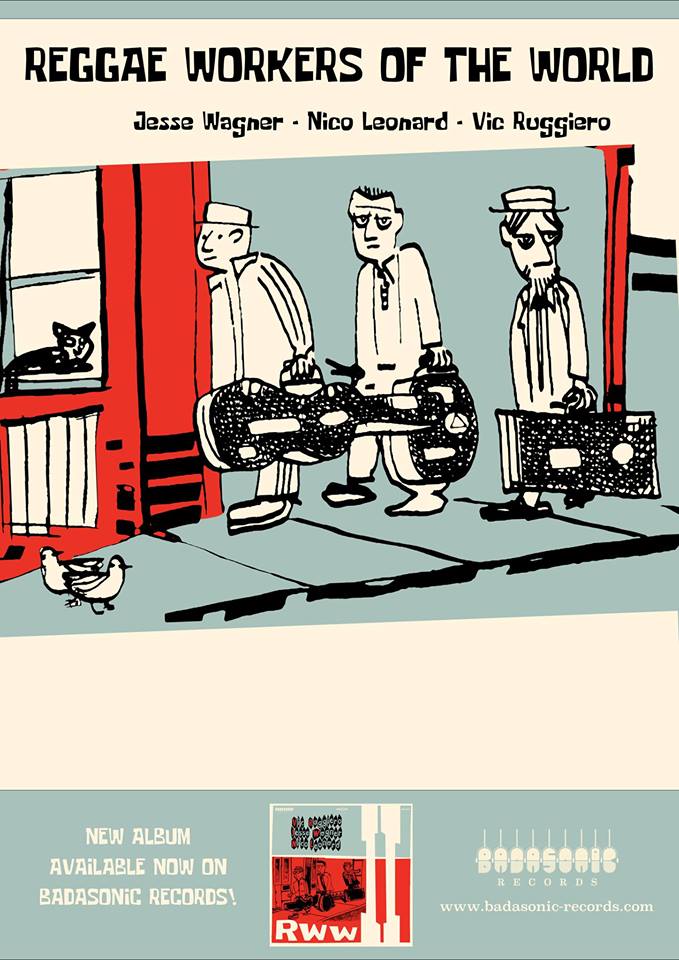 In the Summer of 2014 Vic Ruggiero, Nicolas Leonard and Jesse Wagner began in the Reggae Workers of the World…

Vic sought out Jesse Wagner of The Aggrolites and Nicolas Leonard of The Caroloregians & The Moon Invaders for a recording session this summer in Belgium. While on the road last year, between a busy Slackers’ schedule and his own solo gigs, he began to think of a way to work with two of his favorite modern musicians—singer, Jesse Wagner, and drummer Nicolas Leonard—and how a collaboration with both could be made possible.

In June 2013, Jesse & Vic ventured across the globe to meet for a short series of shows in Oahu, Hawaii. As the natural course of learning to play and sing together proceeded they began to find an intriguing repertoire. During one short week, they harmonized on everything from a ska and calypso standards like “Shame & Scandal” to early rock n roll hits of The Everly Brothers and The Beatles .

A request from the audience for The Righteous Brothers took both singers and the crowd by surprise when they found it worked perfectly. It’s obvious the two singers share an unequivocal reverence for reggae, rhythm n’ blues and rock n’ roll classics, (and the sentiments sung and the styles which they impart). Hearing Vic and Jesse sing their favorites in sweet two part harmony sounded damn good. As lead singers and master harmonizers both this rare duo makes possible a wide array of styles; soul, rhythm & blues, ska, reggae and rock n’ roll.

It’s this range of possibilities that neither Vic nor Jesse seem deliver with such ease even in their respective bands or as separate solo acts. Enter Nico Leonard; in November 2013, with Nico at the recording desk, he and Vic recorded 4 songs at his Pum Pum Hotel recording studio in just a few spare hours.

Nico has played in two touring bands – The Caroloregians & The Moon Invaders – simultaneously for over a decade and produced a dozen records of all styles.

As busy working drummer he’s played everything from ska and skinhead reggae to surf, garage rock and rare exotica 60’s beats, and he’s produced other artists of the same wide variety. He is widely respected for a breadth of skill as a drummer and producer/engineer which fits the stylistic latitude of this group perfectly. Vic plans to remain in Europe at the end of this summer’s Slacker’s tour. Vic, Jesse & Nico will meet at the Pum Pum Hotel Recording Studio, in Charleroi, Belgium. It is a strictly analog studio that uses tape machines and vintage gear. They will make it their headquarters to rehearse, record and play a short run of gigs in nearby cities. The trio will have Vic on bass, Jesse on the guitar, and Nico on drums; a small band that can cover a lot of musical ground . Vic also plays keyboard, harmonica and accordion too, all of which might make a cameo. Vic says, “Other than working to build good rhythms. The next job will be to learn some originals! Both Jesse and I have new songs… Teaching each other songs will be the real treat of this entire project” and we hope will lay groundwork for future collaboration.

Jesse & Vic flew out to Belgium for three weeks, to record at The Pum Pum Hotel Recording Studio. Between recording enough to a release, a new vinyl 12”, they ‘tested their chops’ live by making a short week and a half tour in Belgium and Germany. Vic & Jesse will brought their combination of soul to singing harmonies, propelled by the rhythm of well renowned drummer and engineer Nico Leonard. Trudging along a sonic highway they recorded and performed original new tunes and adapted classics.

Vic said it best when he wrote: “It is a good jumping off point… allows us to rehearse a little , work at new things, get our feet wet, try it out live and then record…all in a very short window of time with talented guys in one of the best studios..and we’ve all done this before, in our lives, being musicians that is… So i know we’re all insane.”